West Bengal College and University Professors Association (WBCUPA), came into existence in the context of a fundamental political transformation that occurred in Bengal in 2011 with the establishment of the newly found TMC Government led by Ms. Mamata Banerjee. This transformation provided an opportunity to the nationalist and democratic teachers of colleges and universities in West Bengal with a new platform for promoting the cause of higher education in the state. The WBCUPA remained committed to help the implementation of the blue print for a new and emergent Bengal, developed under the leadership of Ms. Mamata Banerjee, under whose able leadership a congenial climate has created a better Bengal to live in. WBCUPA is driven by our leader Ms. Mamata Banerjee’s vision to create a healthy, democratic, efficient and dynamic education system in our state by ending the three decade old complete leftist political domination over all segments of education system in the province, which had resulted in stagnant and declining education scenario in our state.

WBCUPA was established on 19 th August 2012. The First State Convention was organized on 22 nd December 2013 at the University Centenary Hall in the august presence of Prof. Bratya Basu, the then Hon’ble MIC, Education; Dr. Partha Chatterjee, the then Hon’ble MIC, Industry & Commerce; Sri Ashis Banerjee, the then Hon’ble MOS, School Education; Sri Mukul Roy, Hon’ble M.P. and Sri Subrata Bakshi, Hon’ble M.P. as well as a number of vice­ chancellors and intellectual personalities of different universities of West Bengal. This convention was attended by about 4,500 delegates. Starting with near about 2000 members, our organization has now about 8500 active members spread over universities and collegesacross the state. On the occasion of the first state convention, the WBCUPA published a volume Trinankush which brought together articles and messages from the Hon’ble Chief Minister Mamata Banerjee and other leading academicians and personalities of the state. Subsequently, our organization has organized conventions, workshops and seminars to address emerging issues in higher education concerning service conditions of the teachers and teaching-learning process. 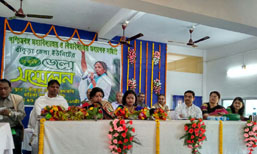 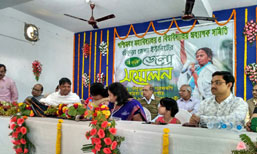 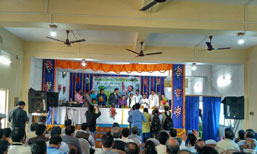 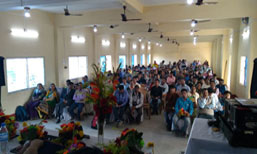 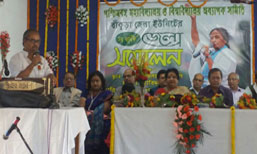